http://blog.timesunion.com/capitol/archives/223733/suny-centrals-top-lawyer-reassigned/
SUNY  William F. Howard (Sapperstein Organized Crime Syndicate Associate) Reassigned to become the senior vice chancellor for legal compliance and strategic alliances. He will deal with governance and oversight issues with colleges and community colleges and the Research Foundation of the State University of New York, according to a SUNY official.
Howard’s former job was the SUNY general counsel, one of the top-paying public law jobs in Albany.
Howard’s salary was $250K a year.
Howard was Former Associate Vice Chancellor, Chief Counsel to the School of Medicine Washington University, St. Louis MO.

(Obviously Howard duped Washington University, just as Howard had duped Stone on behalf of Gilbert, Mark Sapperstein & Longo et al  into believing that he was a man of ethics & integrity)

(William F. Howard’s participation in these numerous fraudulent schemes is commonly known as “In for a Penny in for a Pound”)

The below photos are of “Mobbed Up” William F. Howard and his Organized Crime Syndicate associate, Gilbert Sapperstein 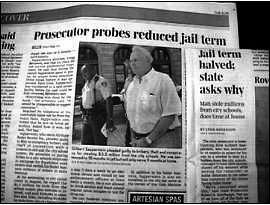 DISCLAIMER: There is no indication, inference, or innuendo that Washington University, St. Louis had any knowledge of William F. Howard’s criminal activities prior to hiring Howard or during Howard’s employment at Washington University.  Stone does find it interesting that prestigious universities in the USA seem to have become havens for people like Howard that engage in criminal misconduct with impunity.  Obviously Howard wouldn’t have touted his prior criminal activities on his resume when he applied for the job at Washington University, St. Louis.   Even before you get to the serious criminal misconduct of William F. Howard, his duties, obligations, responsibilities, moral and ethical issues as an attorney are clearly defined by whichever Missouri Bar Association and/or Maryland Bar Association, Howard is a member of past or present, and that Howard is required to report criminal misconduct involving other lawyers, MD. Bar there is no statute of limitations, etc. Howard as an attorney & “Officer of the Court” has a sworn duty to protect the sanctity of the Court, not to defraud or defile the court.  How Washington University St. Louis deals with this matter once it is brought to their attention will be a defining moment for  Washington University, St. Louis.  Donald Stone is willing and able to testify under oath, voluntarily or in a court of law about these matters pertaining to William F. Howard and his ties to Charles R. Longo, Gilbert & Mark Sapperstein and the numerous schemes involving William F. Howard to defraud Stone.

William F. Howard has knowingly, willfully, and with malicious intent fraudulently concealed his prior criminal activity and his personal involvement with helping to build the Gilbert & Mark Sapperstein Organized Crime Syndicate from Washington University, St. Louis.

This is one of the earliest cases Stone uncovered of the numerous fraudulent schemes of MD. AG. Joseph Curran Jr. (Gilbert & Mark Sapperstein’s close personal friend & political crony) acting in concert with his  Md. Assistant AG. William F. Howard to fraudulently conceal documents from Stone and simultaneously help Gilbert & Mark Sapperstein steal & launder $3.5 million from the Baltimore School Board between

In this affidavit Howard is trying to smear,vilify, & ridicule and white-wash the criminal activities of Longo et al by claiming Stone is involved in a business dispute with Longo

when in fact Howard had personal knowledge of Longo’s numerous criminal activities and those targeting Donald Stone and Stone’s valuable patents and intellectual property.

Other Fraudulent Schemes William F. Howard Helped to Accomplish by falsifying this Affidavit ?

(William F. Howard’s participation in this numerous fraudulent schemes is commonly known as “In for a Penny in for a Pound”)